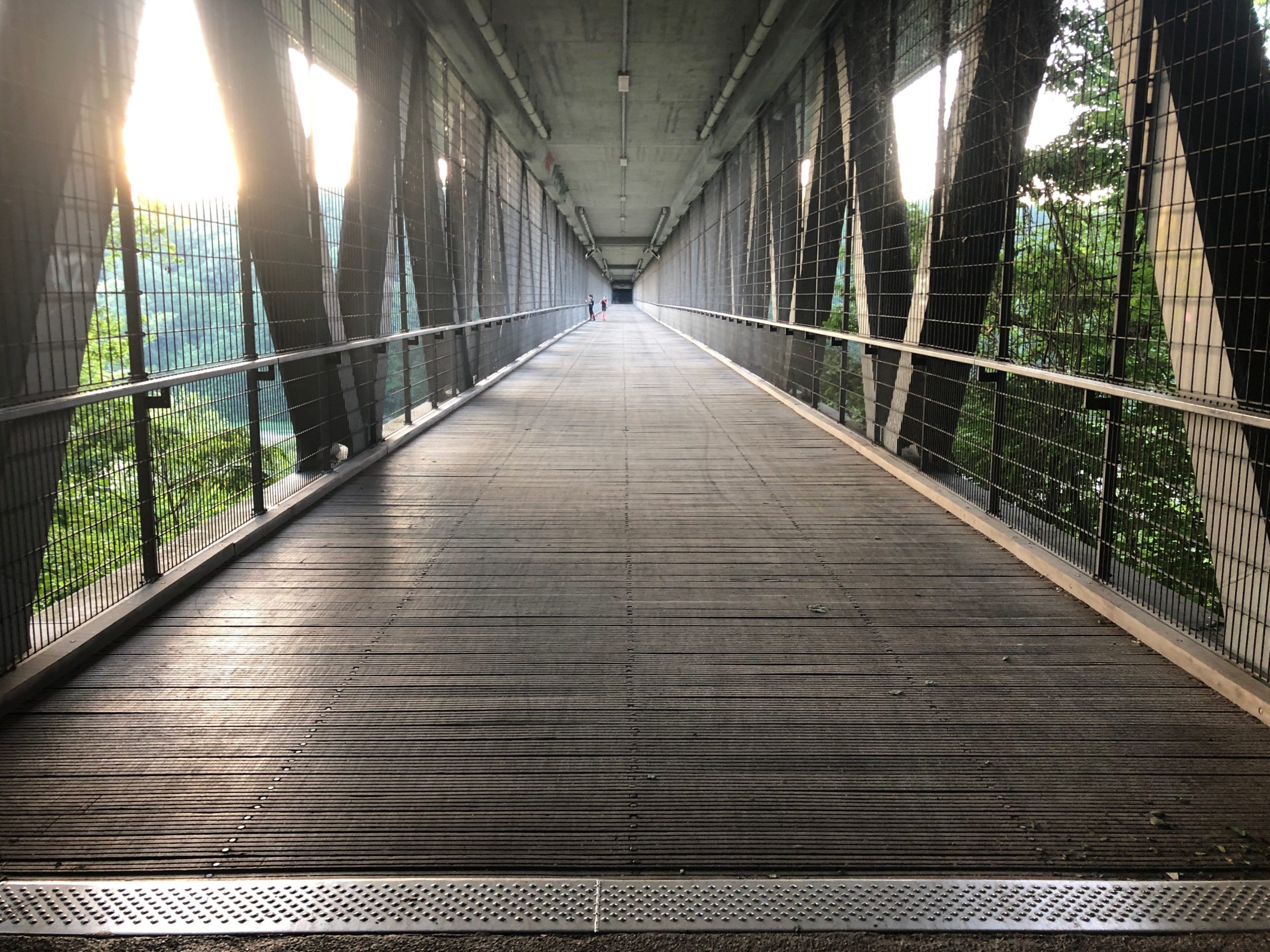 As usual, I couldn’t get to sleep the night before. It wasn’t nerves, really, just the usual mental checklist, involuntarily repeated over and over, even though my bike was already packed and my clothes and things laid out to avoid leaving anything behind in the early morning’s confusion. I finally fell asleep around 1 am, or thereabouts.

My alarm went off at 4:45 and I shuffled to the kitchen and put the kettle on, sat and sipped my tea for a moment, and then mechanically drew on my kit. I made four sandwiches on white bread – two sweet, two savoury – having already sliced off the crusts a moment before to save space – I wish I was joking. I decided at the last minute to leave my headlamp, my bar-mounted lamp would have to do. Anyway, I was hoping to make it back before sundown. I kissed my wife a quiet goodbye and looked in on my daughters, still deeply sleeping, and I wanted very much to join them. But, I decided a few weeks ago to ride this event, and today was the best chance during our family holidays to do it. So, with a wistful glance, I turned and carried my bike down the staircase, the clicking freewheel the only sound to be heard. 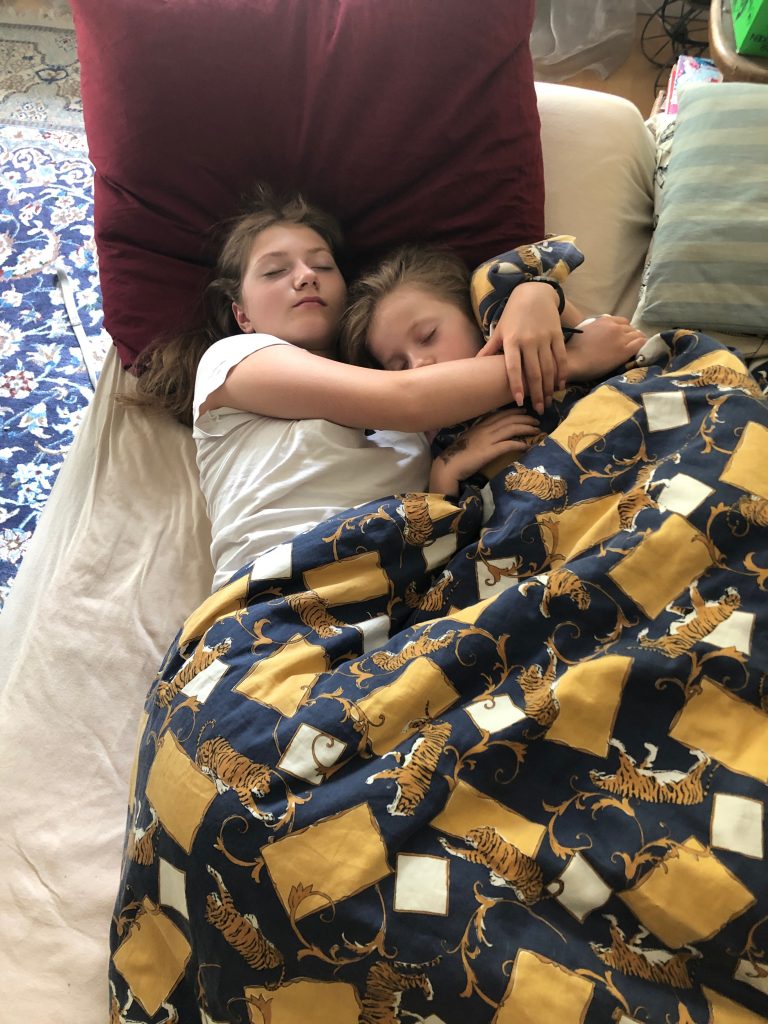 It had been raining the past weeks and a damp chill was in the air. Still, it promised to be sunny and warm so, needing space, I left my jacket in the stairwell and sat and put on my shoes. Riding through the deserted streets of Sendling to the “start” at the Grosshessalore Bridge, I contemplated how at that moment it felt just like the ride to the start of any other event – the only difference being, as I got closer, I wasn’t meeting other cyclists.  I fumbled around Pullach trying to find the famous bridge, which was once a famous location for suicide, but now it’s thankfully fenced off. Crossing the bridge, I again got lost finding my way to the banks of the Isar beneath, and so concluded an inauspicious start to my 260km, Orbit360 Bayern. 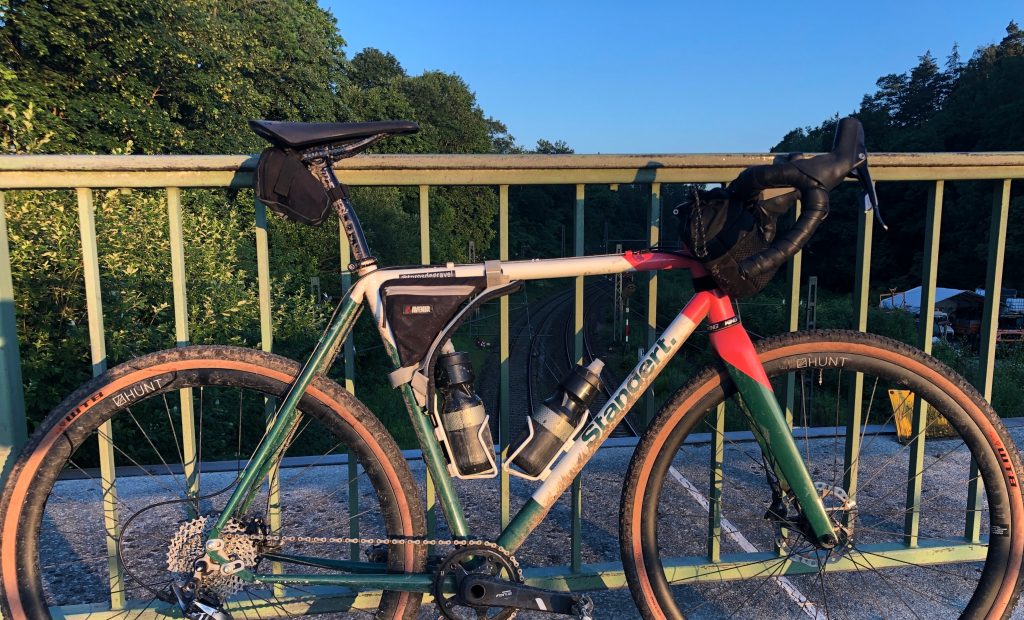 I pressed start on my Wahoo Bolt and off I went, moving fast along the well-paved gravel path. But, after only a few kms, the path veered right and I entered what would be the first of countless, unexpected challenges over the next 19 hours – this time a tough, wet and winding stretch of singletrack ornamented with roots and muddy holes of unpredictable depth. Having grown up riding mountain bikes in the 90s, this was not a dealbreaker, but it meant for some very slow going. The highlight was at least a kilometer of path covered in 15-30cm of clear water, for which I swore I would scrutinise every rider’s ride to make sure they rode it too. By km 12, an hour had passed and I had crashed twice. Only 250k to go! 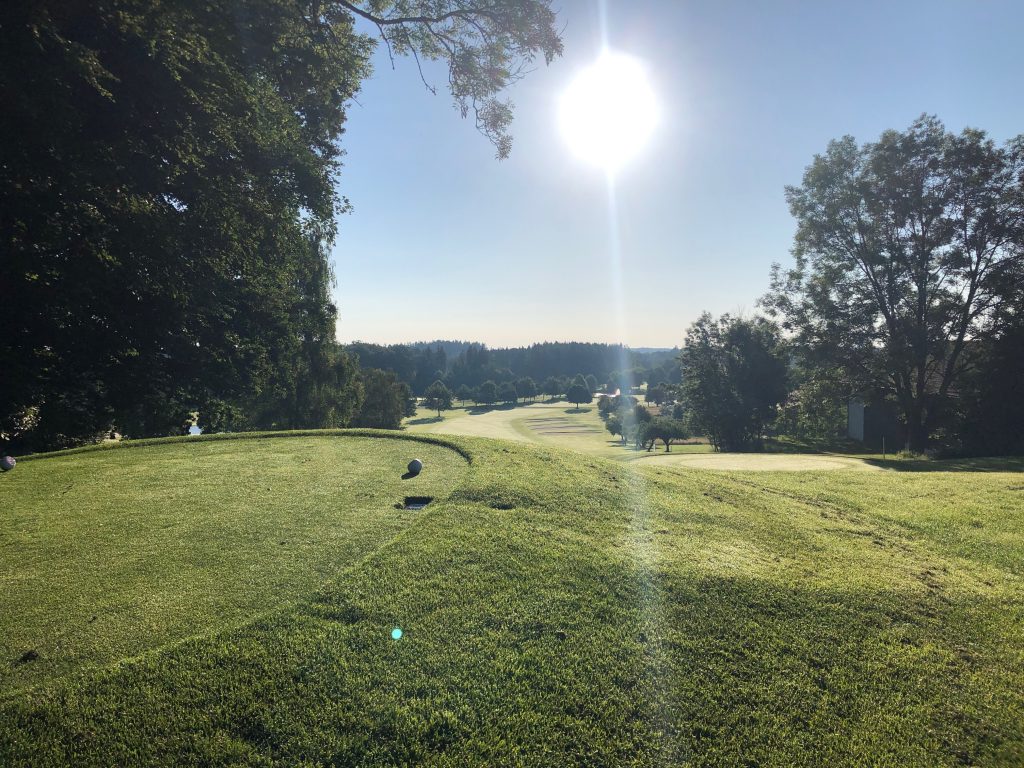 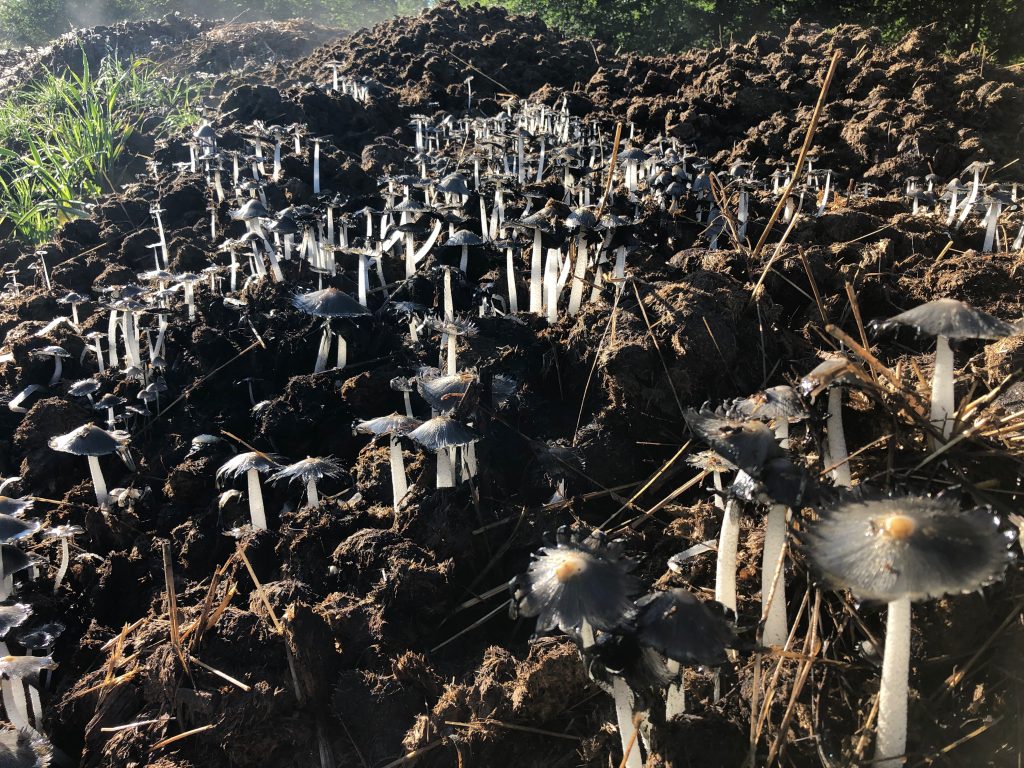 Pile of steaming manure with these cool mushrooms 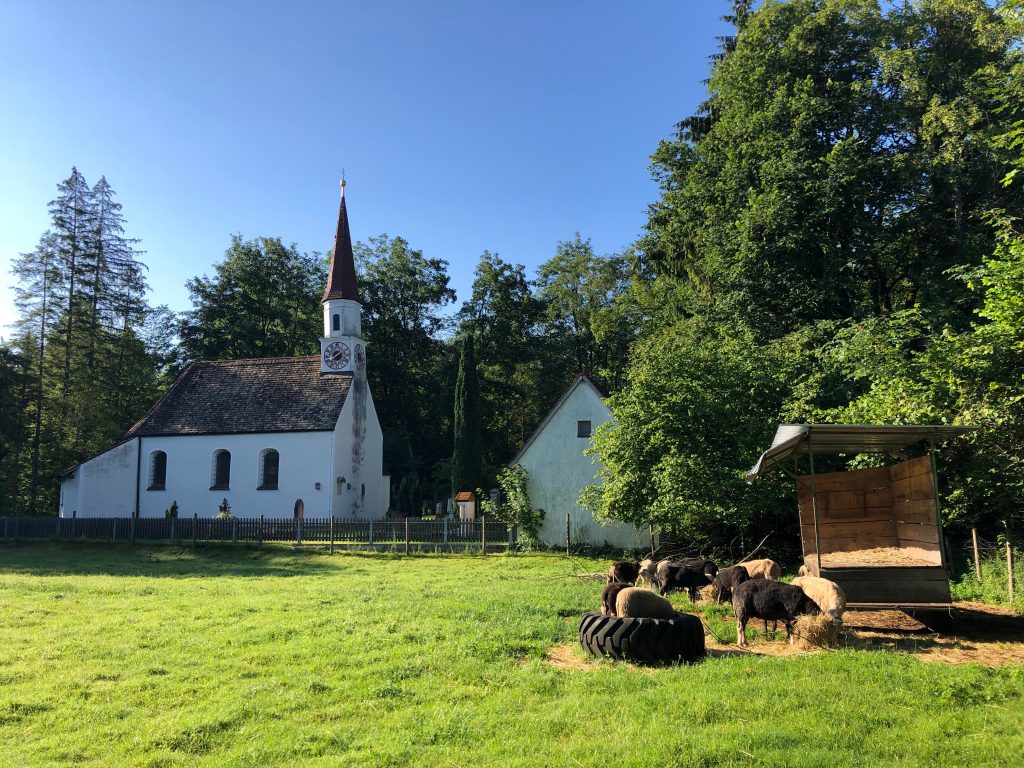 Two sheep inside a tire 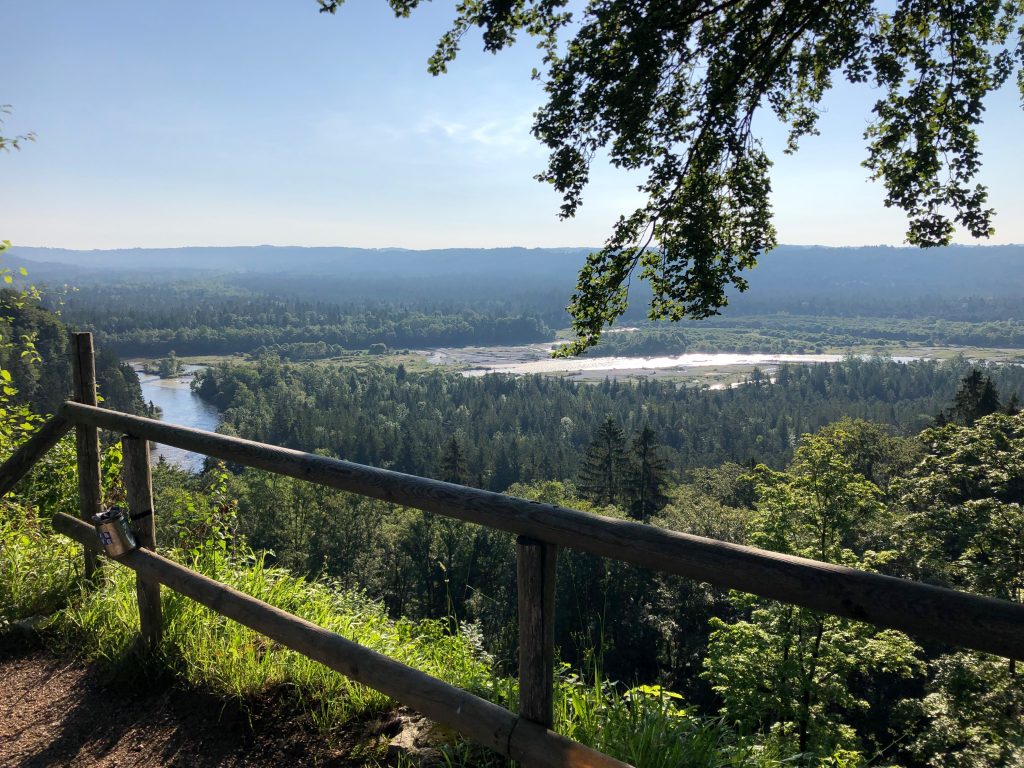 View of the Isar Valley next to some wealthy mansions 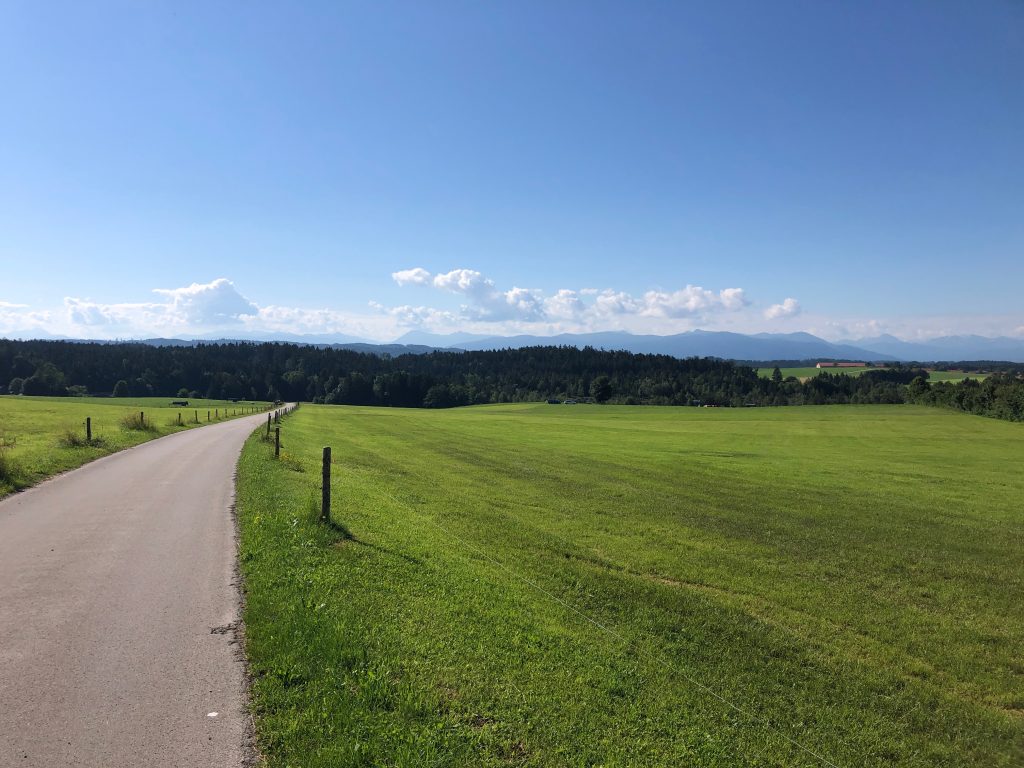 A brief, fast downhill that turned out to be the wrong way so I had to climb back up.

At the false downhill (above) I ran into another Orbit rider, “Ulli”, who like me was questioning the sanity of the course designer. We split soon after and by the time I reached Bad Tölz, 4 hours later, I did the math and hoped that the course would even out and that the worst was behind me. (I was not yet able to find Ulli on Strava or komoot, but I hope he had a safe ride.) 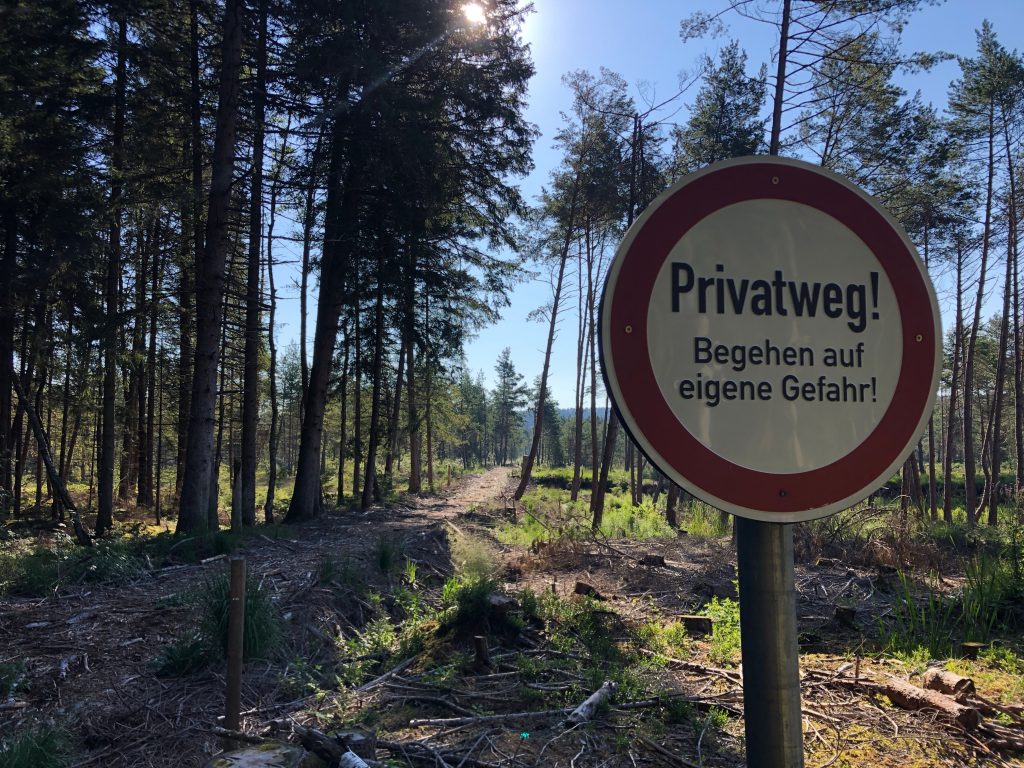 Crazy road made of sticks. 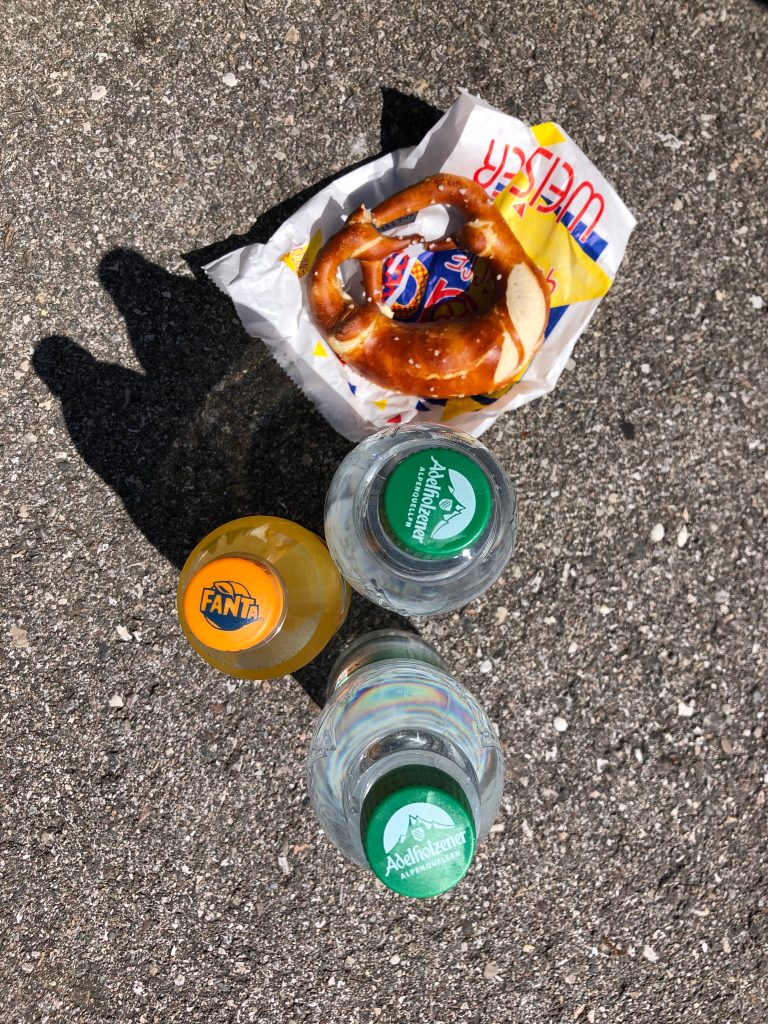 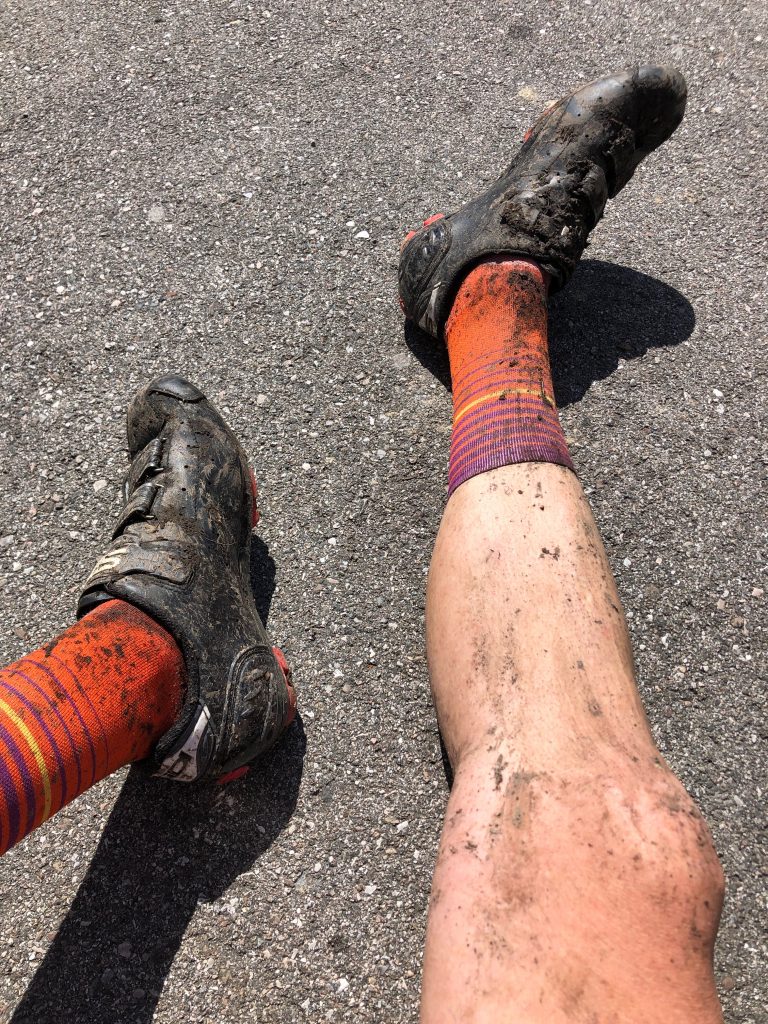 Not the “in” look in tony Bad Tölz

Au contraire. More or less, this is how my morning and rest of the day (and night) continued. As soon as I built up a little rhythm, the path would veer off into the woods for the next bitter, mocking, unknown challenge, and one best suited to a mountain bike. Often I  had to backtrack, paranoid that my ride would be DQ’d if I veered from the official track. This cost me considerable time at Kirchsee before Bad Tölz where I was up to my shins in a moor. At that point already, my chain was squeaking and between you and me, this ride was starting to get personal. 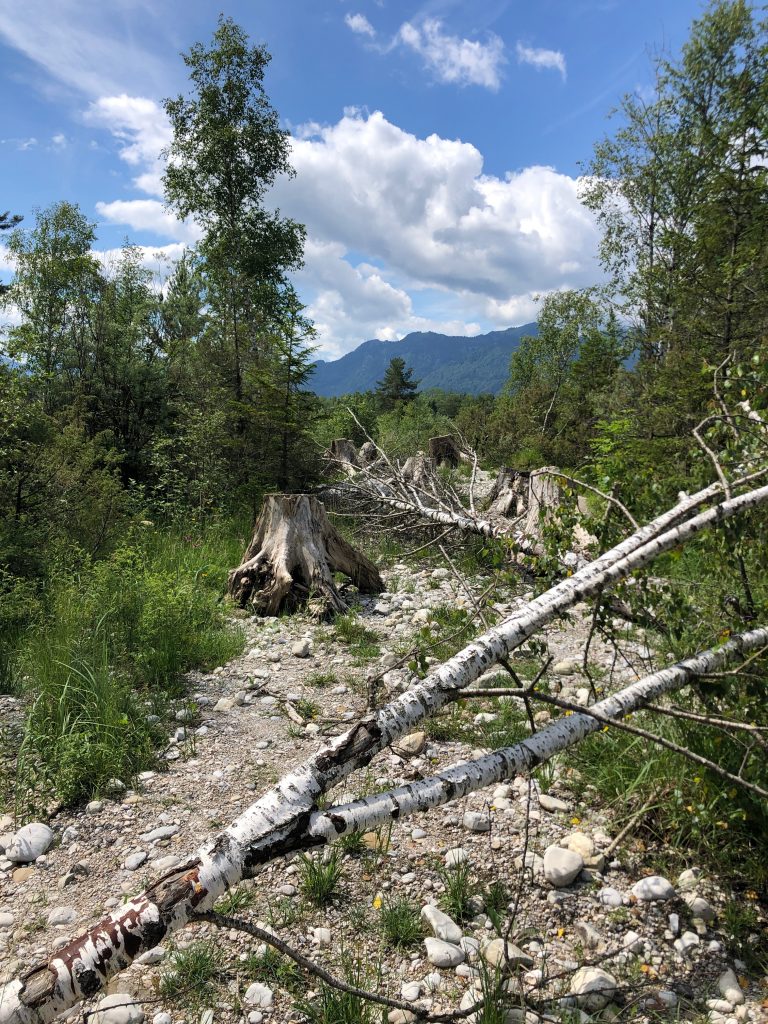 After tromping over fallen trees in Lenggries, I squeaked along the Sylvanstein Speicher and came across a man in a foldable lounge chair directly in the middle of the bike path. Slightly annoyed at the “nerve of this guy!”, I rode past but stopped after a few meters, considering the club cycling kit he was wearing combined with my chain whose squeaking was driving me nuts. I rode back and cooly asked him about the area and if there were any bike shops. We got around to talking about where I was headed and eventually about the Orbit 360, until finally in so many words I convinced him of my sad predicament and his desire to help me. With several loud shouts of “HORST!” he eventually produced a friendly-looking man who apparently managed the aid station in front of which we were talking. He asked Horst to get some Schmiermittel and Horst returned with two spray cans. I prayed they were not degreaser. One was, but the other was actually spray oil! I sprayed and thanked with abandon before pedalling quietly away, the lucky recipient of “trail magic”. 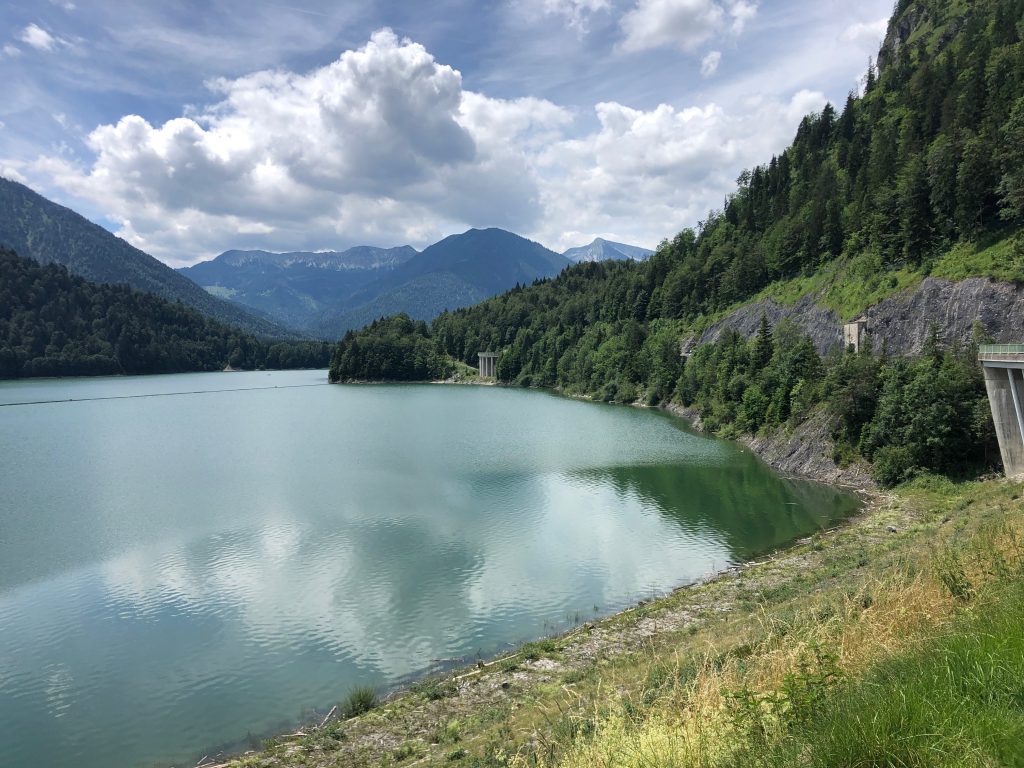 The river crossing at Rißbach, of course, came right after, and here I was required to plant my bottom bracket underwater once more to use my bike as support in crossing its icy cold, fast-moving waters. Successfully completed, I used the opportunity to wash out my shoes and socks and sat for a few minutes to admire the view. Following this, I had to jump a fence twice to continue along the route. 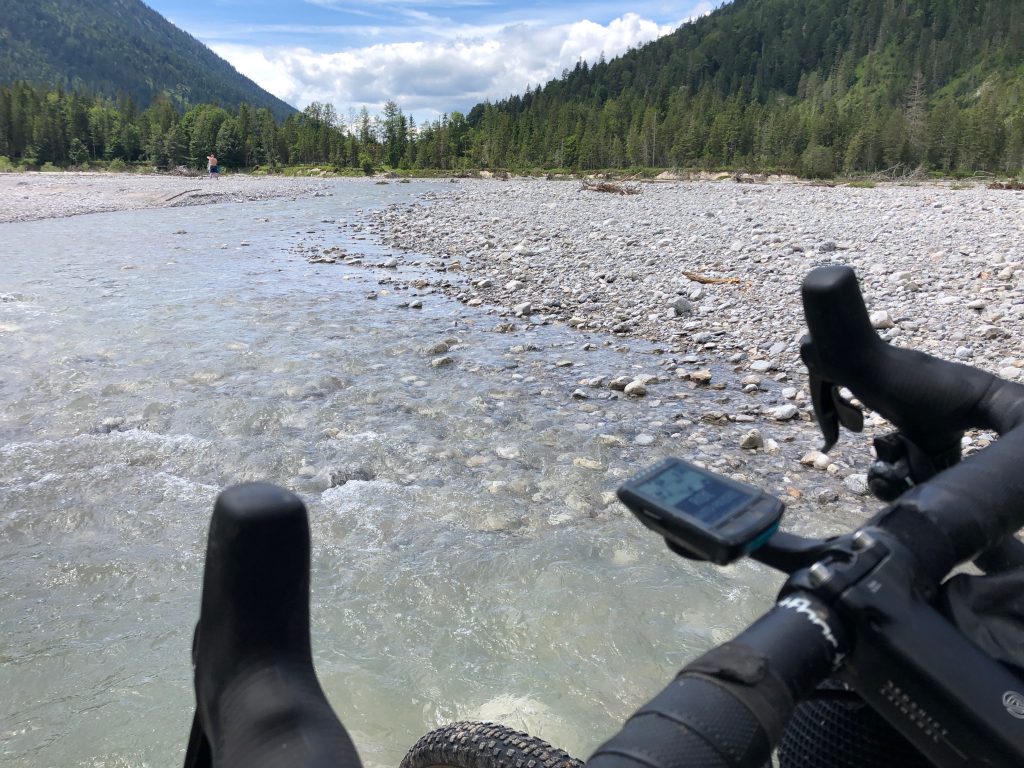 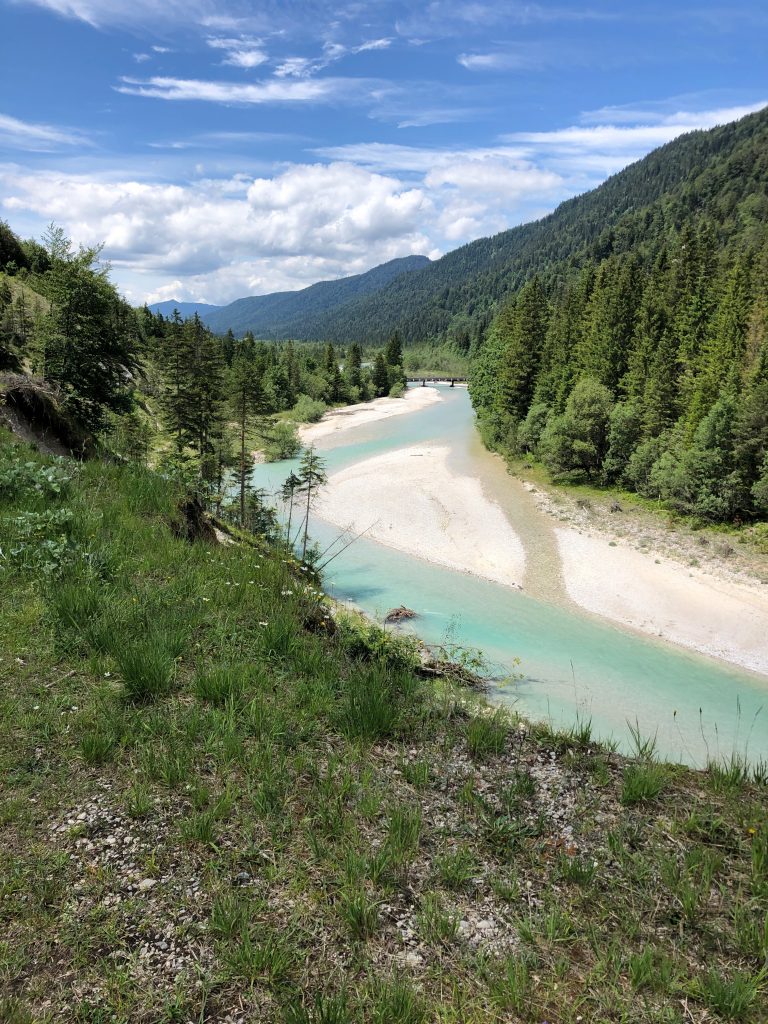 Filling my bottles in the Isar, I made a few fast kilometers on asphalt before turning right to ascend the Mitterberg, which was purported to be the highest point on the course at 1090m. At 10-15%, the climb was mostly unrideable (for me and my bike anyway) so I resigned myself to walking and slowly eating a sandwich in the baking sun. Occasionally, small groups of happy e-MTBrs zoomed past.

Fire road gave way to singletrack, and I emerged to a strange canal with milk-like water that ended at one of the most spectacular lakes I’ve ever seen, the Walchensee. I made my way around its turquoise waters and stopped at a Biergarten for a Radler and some fresh water, the water which I pulled out of the Isar had tasted kinda funny.

I climbed up and out of the lake, past the gondola station and down a long descent towards Ohlstadt, only once nearly careening off a cliff at high speed trying to admire a fleeting glimpse of the Kochelsee.

On the next climb, I met some friendly, helmet-less mountain bikers who were impressed by my journey and didn’t mind walking with me up the steep climb to hear my tales of wonder and woe. 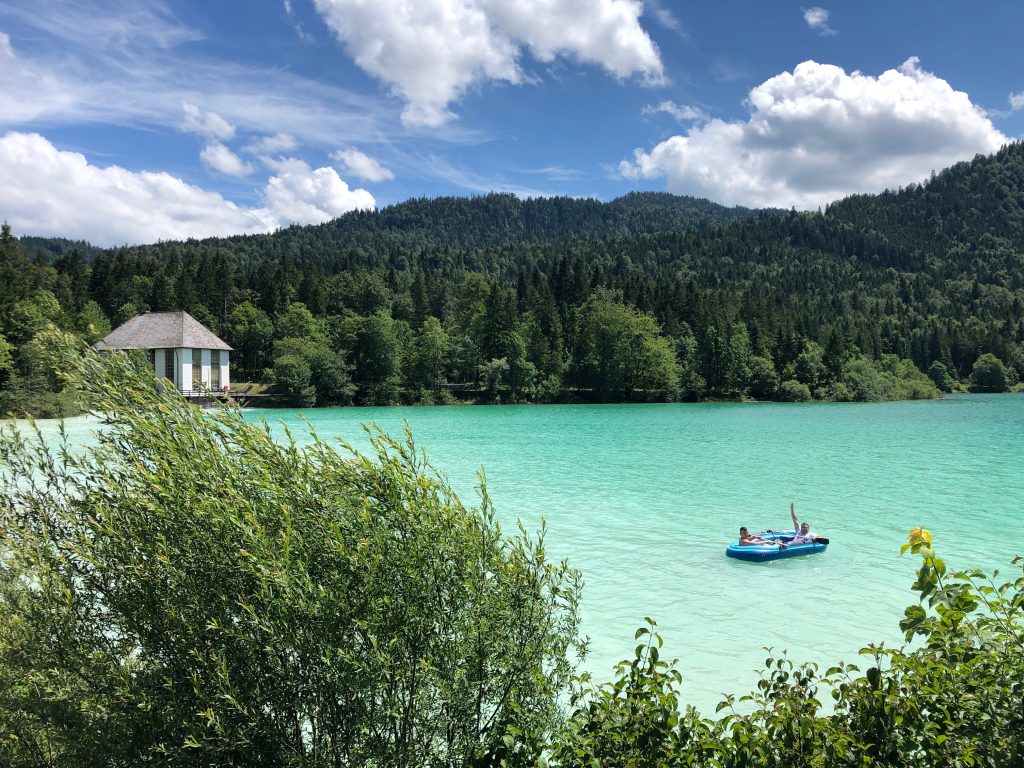 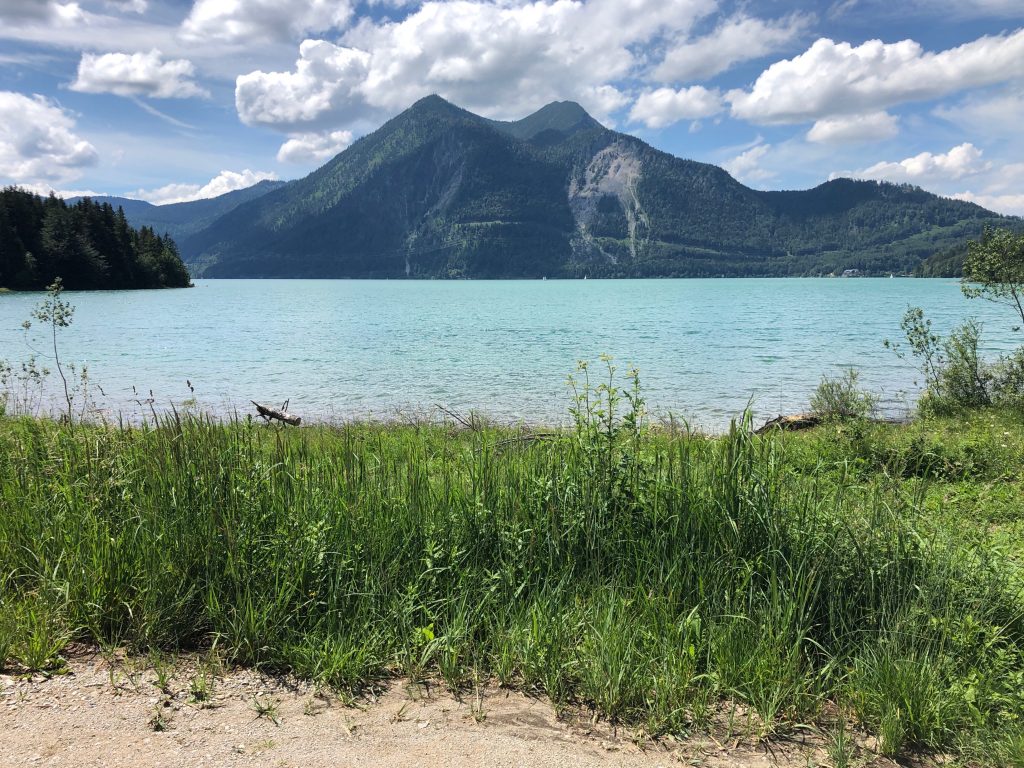 In Ohlstadt, I had planned to stop for pasta, but it was Mittagsruhe and they were closed at 16:40 for another 20min. No way I was waiting. I carried on through the very wet Murnacher Moos, feeling quite tired for once, so I sat down and, while admiring some cows, ate the rest of my last sandwich: tofu, hummus and tapenade on crustless, white bread. After this, I was required to cross another pasture populated by beefy bovines lounging at the gate. Pardonnez-Moi, les Vaches! 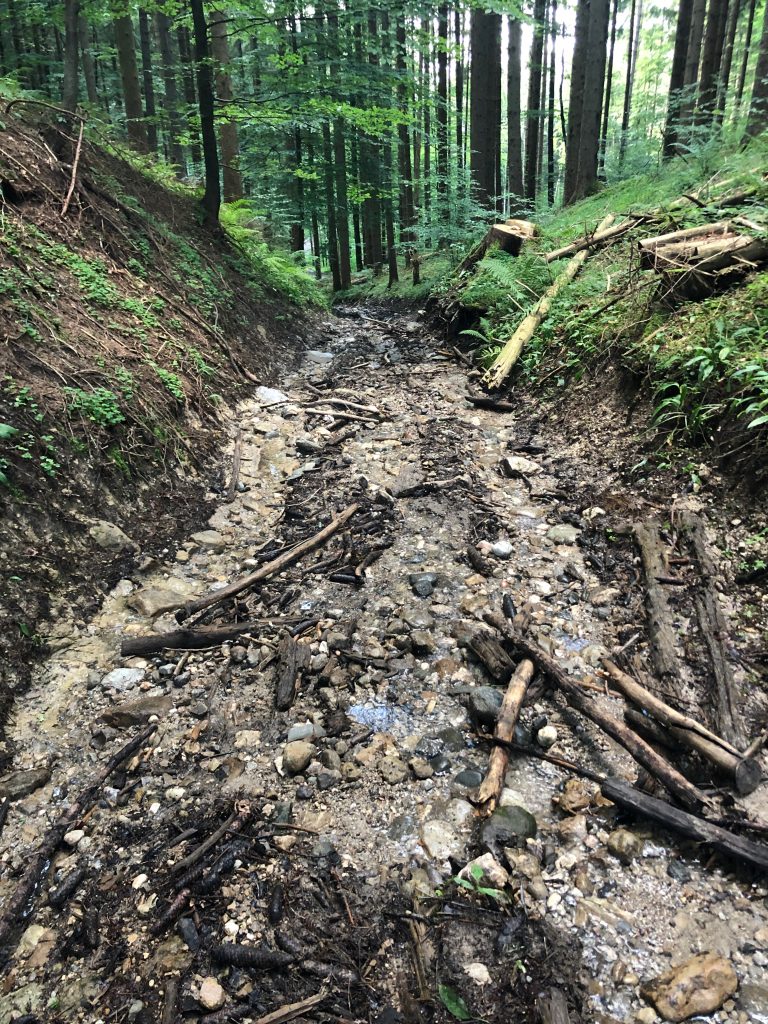 Then began another grim part of the journey as the trails seemed to meander endlessly through singletrack and paths, paths which were not really paths at all, but natural drainage gullies for the lower hills. Bushwhacking and cursing would be an apt way to describe my time there.

Approaching nightfall, the gate was locked at some kind of private land so I needed to backtrack and reroute over Benried on Starnberger See, stopping afterward in some gas station for a pretzel and some water. 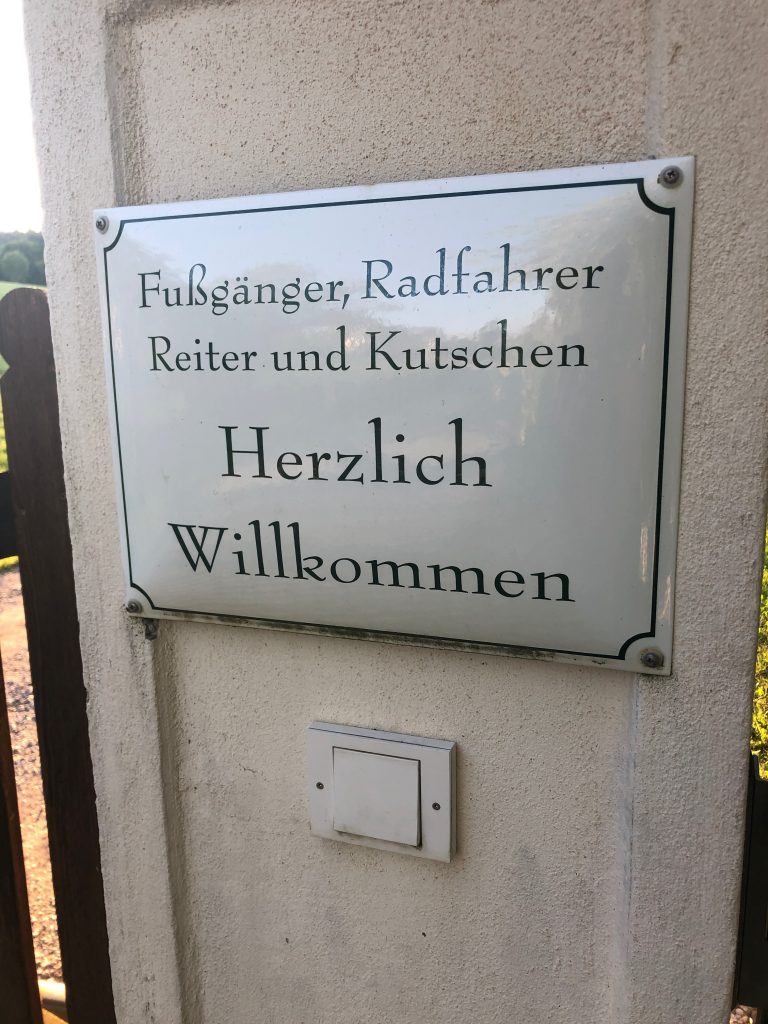 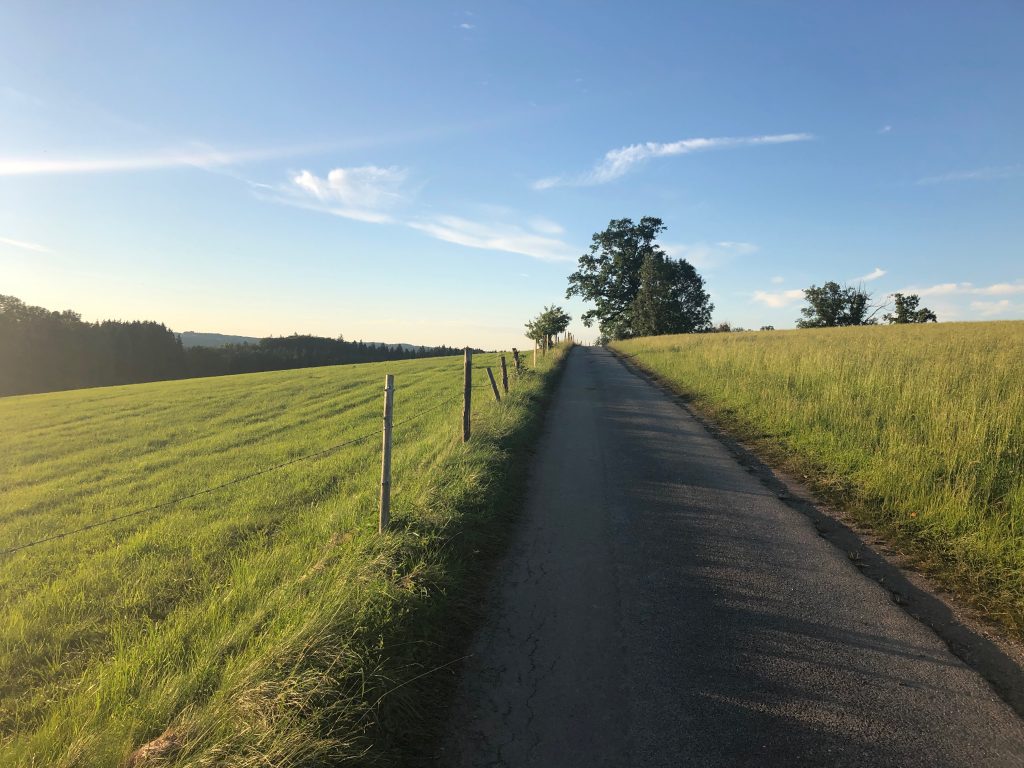 Leaving Tutzing, I made the Andechser Kloster at Ammersee, and after the sun went down the singletrack began, and I now I thought longingly of my headlamp left at home in Sendling. The going was not fast, and my wahoo cut out a couple of times which required I stop for 10min each time. Still the best computer on the market. 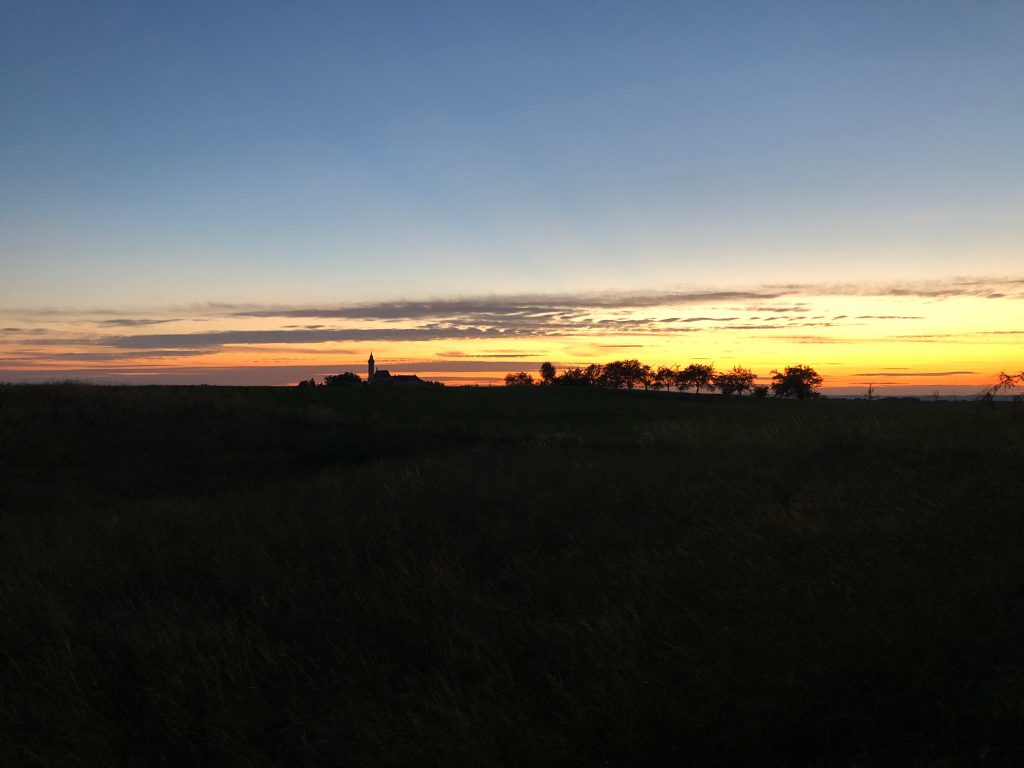 Kloster Andechs in the distance

My wife checked in and asked if I wanted a pick-up and I told her no way, even if I have to walk.  We agreed she’d meet me at the finish. By now it was pitch black in the forest, and the winding singletrack made the going slow once again. Occasionally a broken branch made itself a nuisance in the thick forest, and one ravine, in particular, was pretty hairy. 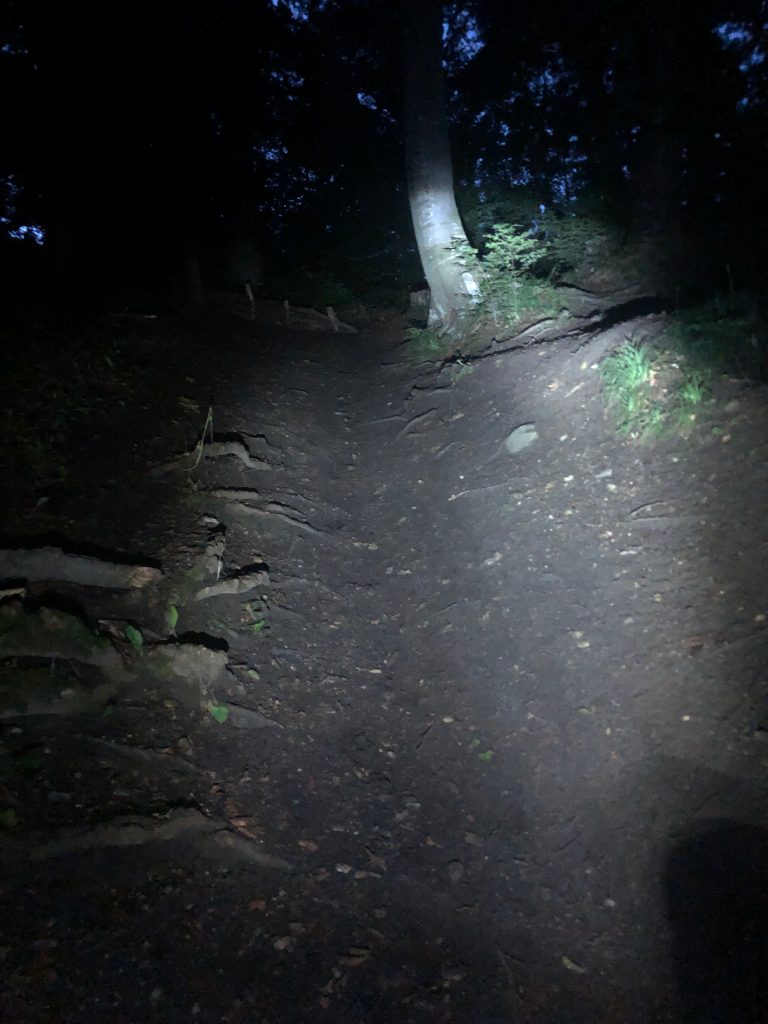 Eventually I made Förstenrieder Park, and aside from a few, meter-high, grass singletracks, and one ridiculous fence crossing, I was able to make time, which was good as my light was beginning to dim and I was too lazy to stop and hook up a powerbank. I finally made the steep climb back up to the bridge and across to the finish at 12:45 am where my wife was waiting with a hug.

All in all, I believe a gravel race should be won by a gravel bike and I would definitely have been faster on an MTB. That being said, I was pretty proud of myself the next day for not giving up, and having ridden many other gravel events, including DK200 on the muddy year in 2015, I’d put this up with one of the hardest challenges I’ve completed to date. This was not just some trip to the beer garden.

And because of that, taking a swim and laying in the grass on Sunday in Feldmoching was that much sweeter.

Any cookies that may not be particularly necessary for the website to function and is used specifically to collect user personal data via analytics, ads, other embedded contents are termed as non-necessary cookies. It is mandatory to procure user consent prior to running these cookies on your website.