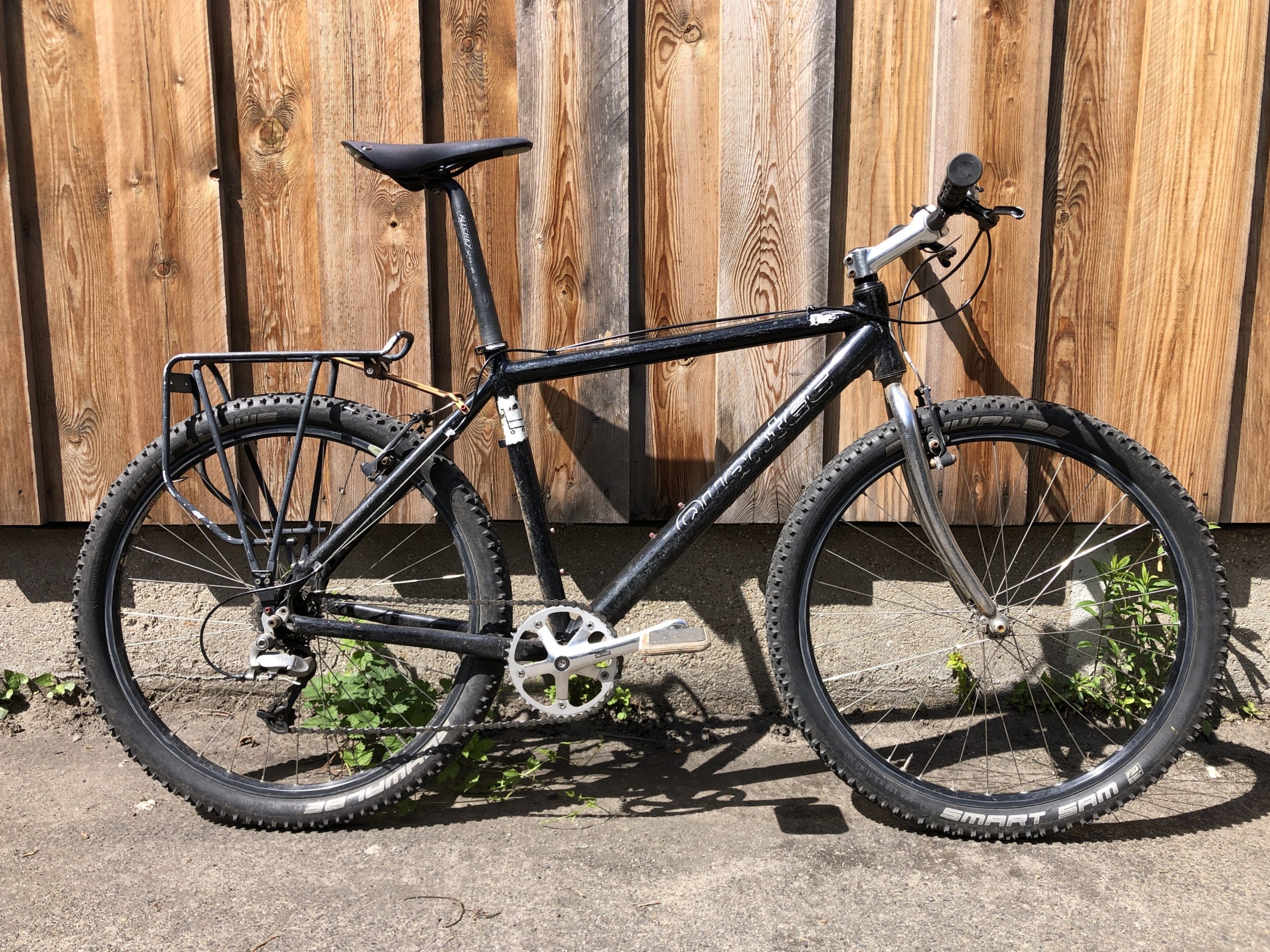 Quality made and built bikes are also, surprise! sustainable. Mostly you just need to oil the chain and pump the tires. Still, occasionally, it’s time again for a new cassette, rear derailleur, brake pad or other necessity to keep you riding. And after a while the question arises: “At what point in replacing all these darn bike parts does my old bike become a new bike?” This question I’ve nearly found the answer to with one bike, where the only original part is the frame. I call her: “Black bike”.

Black bike first saw action as a messenger bike, put together during lean times in 2004 by my old friend Ken Brinsmead (now of Wahoo and derailleur fame). Black bike carried packages all over Berlin for a few years, and even once won the famous Berlin Halloween Alleycat, before being retired and gathering dust. That was until a few years ago when, like a trusted criminal colleague ready for one last big heist, Black bike reemerged as my jokingly nicknamed “S-bahn Schlampe”, the Berlin term for an old, unassuming bike you’d park at a train station.

I’m only joking, I would never lock a bike at a train station.

In honor of Black bike’s years of service, and thinking about last years’ Shift Cycling Culture’s Clunker Rides,  I would like to inaugurate a small tradition inspired by the popular and ubiquitous “New Bike Day” by introducing #oldbikeday to pay homage to the silent steeds standing the test of time, starting with Black Bike. Let’s have a closer look at her for posterity, shall we? 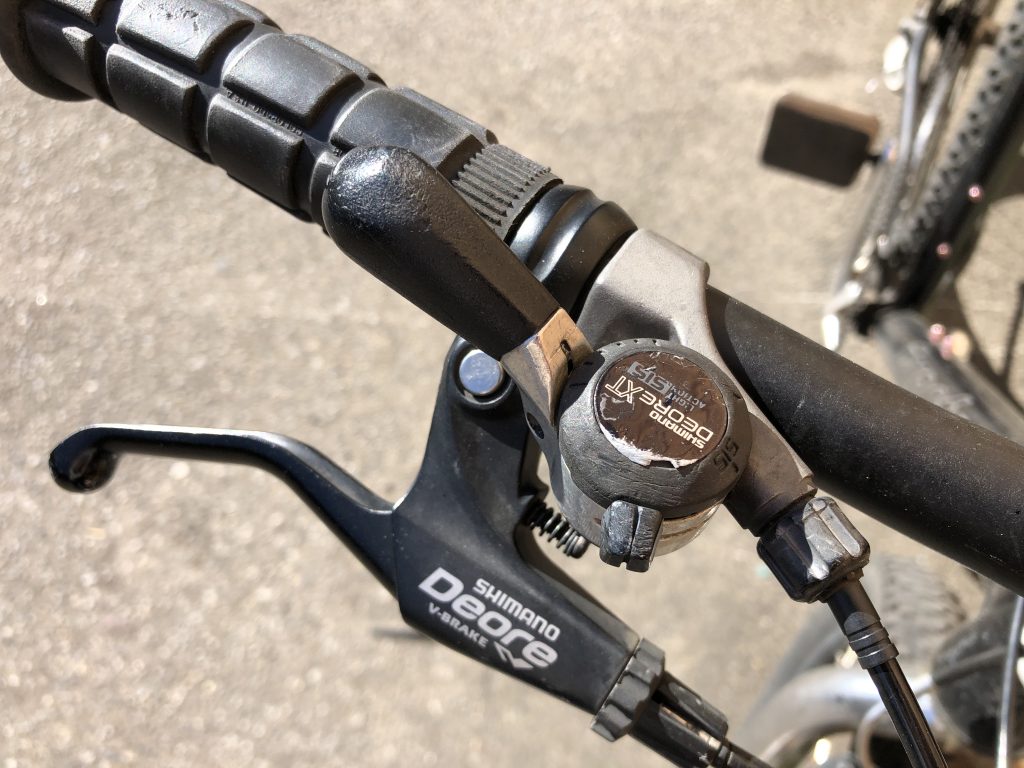 Younger readers might not know what this is, but at one time it was the pinnacle of mountain bike technology: the Shimano XT thumb shifter. With options for both friction and indexed shifting (I prefer friction), this ingenious contraption allowed you to change gears with just the push of a thumb or the pull of a finger. It still works today, and combined with my third pair of Oury grips, no-fuss Deore levers and a cheap bell, I  round out the retro cockpit segment of the Black Bike presentation. 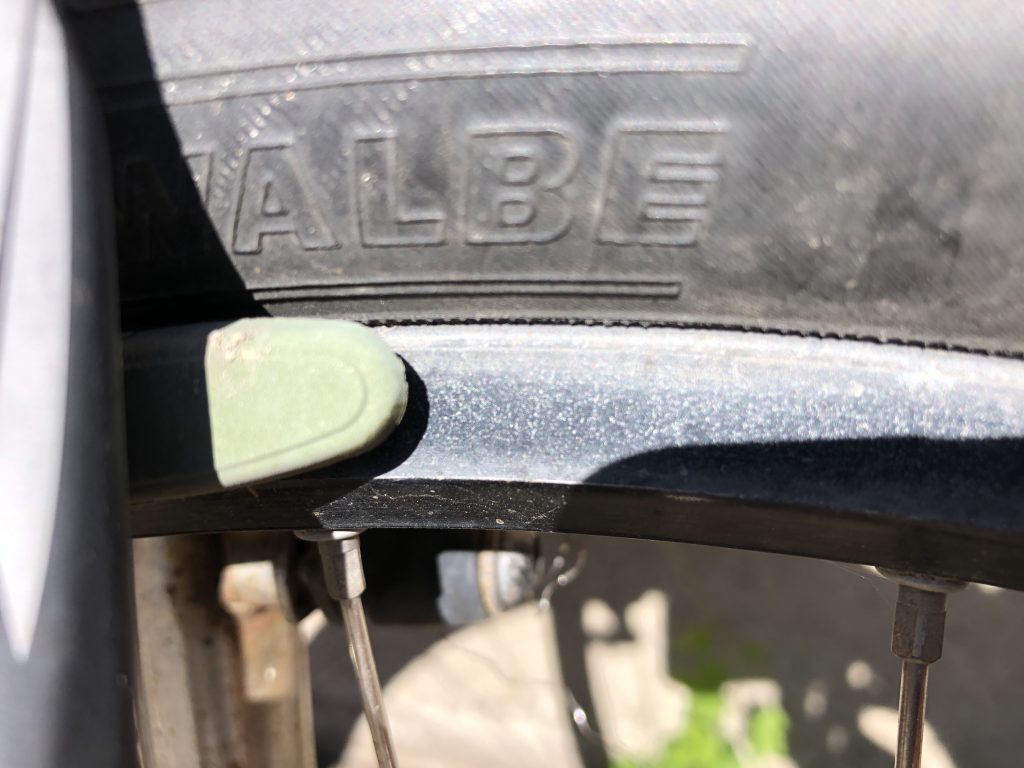 What’s that you may ask? That is an aluminium rim with a coating that Mavic named “Ceramic”, which I believe uses ground ceramic in the anodisation. For these, you need to use special brake pads, but aside from miserable performance, especially when wet due to the slippery surface, these puppies will literally last forever. It’s been 15 years and i haven’t put a scratch in the coating, and I’m on only my second pair of pads, the first pair was used already when I mounted them.

For this, I will take the performance in trade (who needs brakes anyway?) and now, by sporting the 2.2 Schwalbe Smart Sam’s, Black bike responds to rim wear and the sight of Berlin cobbles with a disinterested pff. 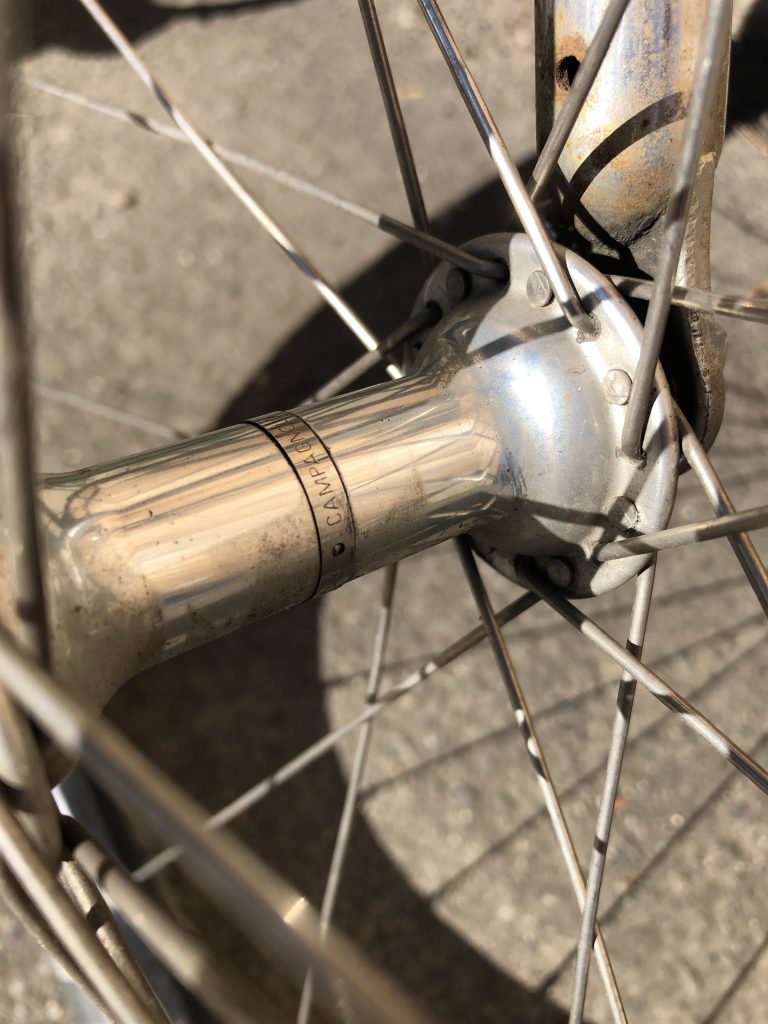 This immortal rim/tire combo is laced to a Campagnolo Record hub and is part of the first and only wheelset I ever built with my own hands. Each wheel cost me a day of cursing and swearing but they still run true as ever, 15 years later! 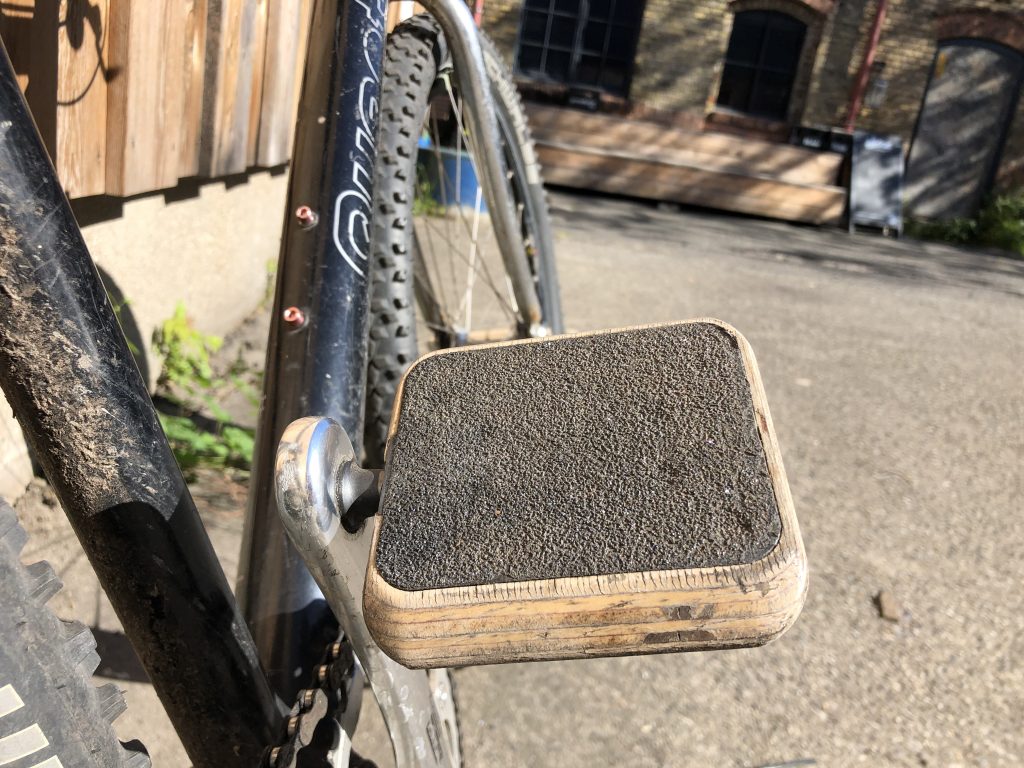 For pedals, we have what are easily the most comfortable and fun pedals for city cycling in the world, the MOTO pedals from Berlin’s own Ali Barjesteh who gave me a pair to try out long ago. These simply feel great on your feet, look amazing and as an ex- and sometimes-still skateboarder, exude good vibes. These, by the way, are almost ten years old! 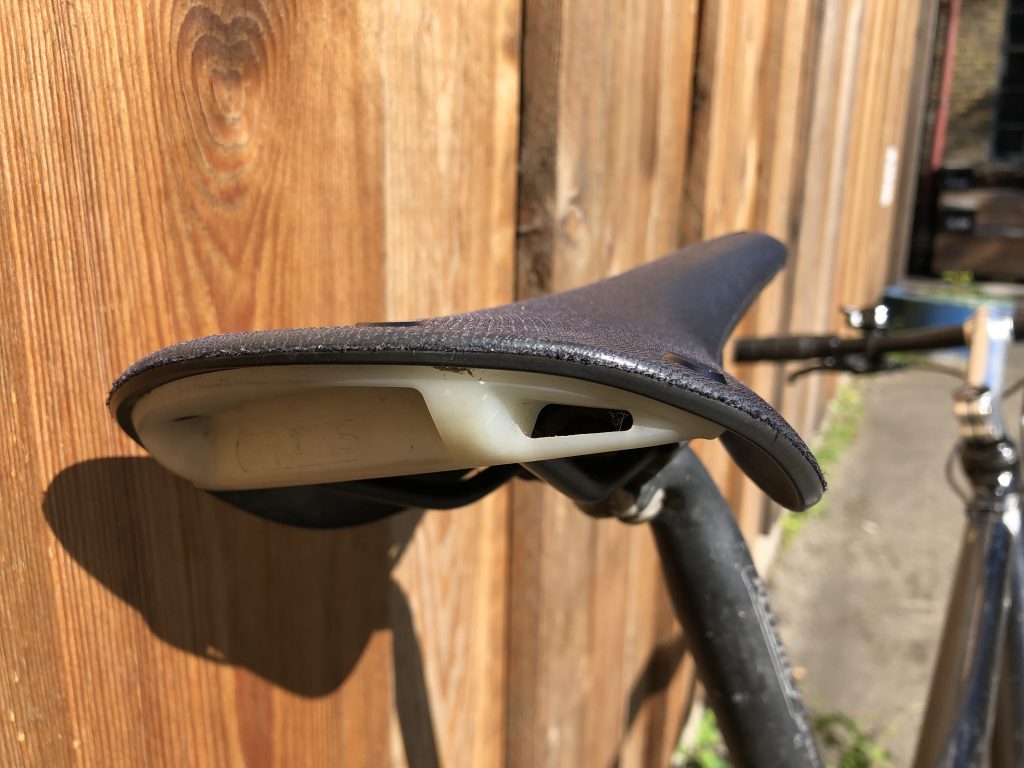 Next, no bike of mine would be complete without a Brooks Saddle, and it’s not only because I have worked for Brooks now for over ten years. Brooks makes the best saddles, period, and this one is a prototype Cambium 158 with a baseplate made from Liquid Wood, a plastic created from the remainder of paper production. 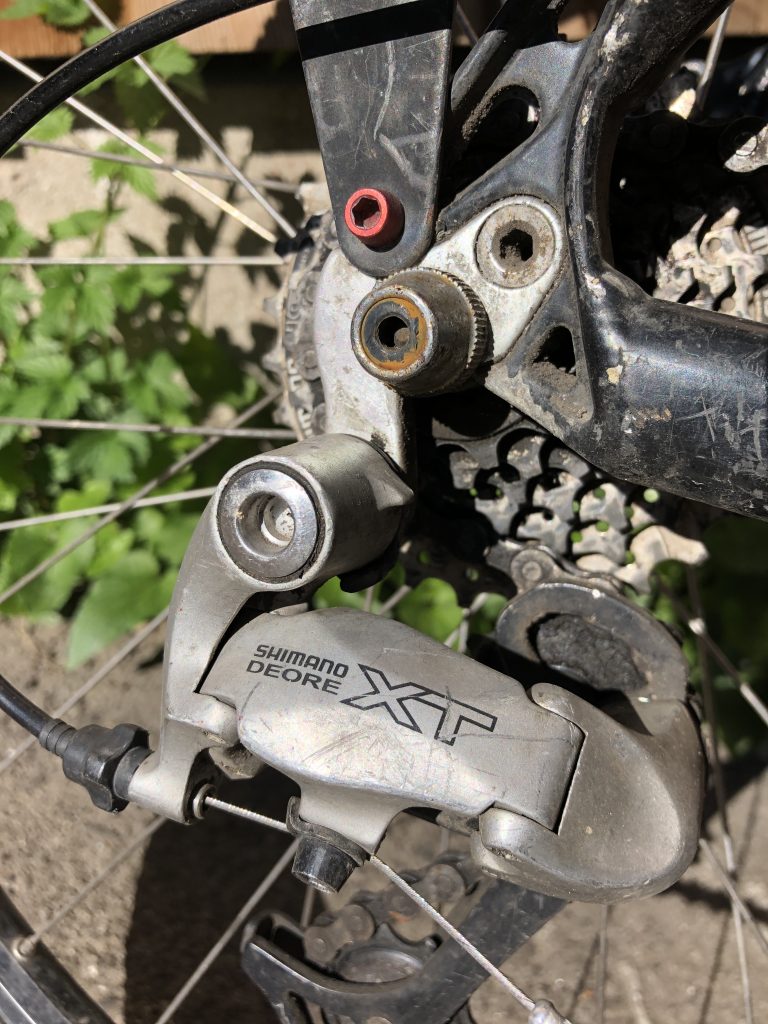 In the drivetrain department, we have what once was high tech –  a 7(!) speed cassette! This almost endless array of gears is laced to a single chainring, which gives me a total of (1×7=7) 7 gears! All of which I use regularly. 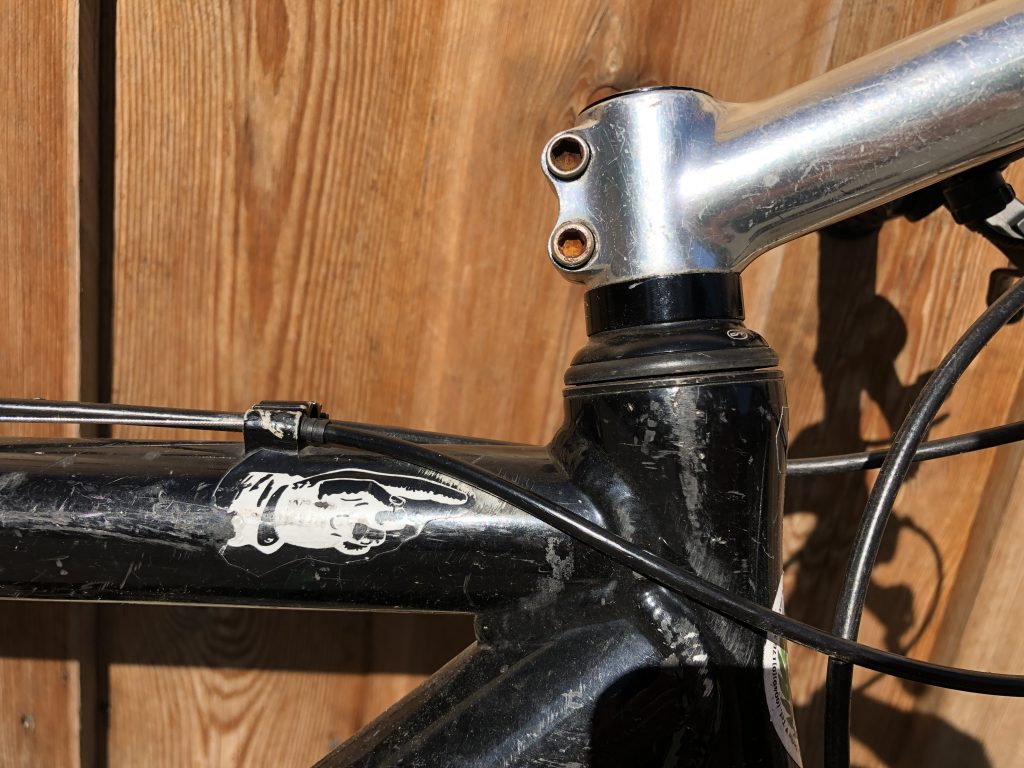 Finally, there are a few stickers, and like tattoos, they remind me of my youth and carefree times spent firmly believing that bikes were the future. And in my case and many others, you know what’s funny?

Any cookies that may not be particularly necessary for the website to function and is used specifically to collect user personal data via analytics, ads, other embedded contents are termed as non-necessary cookies. It is mandatory to procure user consent prior to running these cookies on your website.